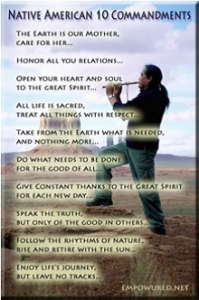 “Through supporting Indigenous Peoples you’re putting in place a system of order based upon a more circular basis of economy, instead of the vertical economy that the system is working on – where the land isn’t looked on as Mother Earth but as a resource base. Indigenous Peoples look at Earth as part of the decision making process…what we do to the planet will sooner or later impact us.” – Arthur Manuel (Secwepemc)    Shayne del cohen  Journal #2871    6/11/13

“The Native was a natural conservationist.  He destroyed nothing, great or small.  Destruction was not a part of Native thought and action; if it had been, and had the man been the ruthless savage he is accredited to be, he would have long ago preceded the European in the labor of destroying the natural life of this continent.  The Indian was frugal in the midst of plenty.  When the buffalo roamed the plains in multitudes he slaughtered only what he could eat and these he used to the hair and bones. I know of no species of plant, bird or animal that were exterminated until the coming of the white man.”    –  Chief Luther Standing Bear, Oglala (Teton) Sioux

The Circle “You have noticed that everything an Indian does is in a circle, and that is because the Power of the World always works in circles, and everything tries to be round.  The Wind, in its greatest power whirls. Birds make their nests in circles. . . .the sun comes forth and goes down again in a circle.  The Moon does the same, and both are round.  The life of a man is a circle from childhood to childhood and so it is in everything where power moves.”  –  Hehaka Sapa (Black Elk),Oglala Teton) Dakota Elder

The world is not linear.  Life is not linear. Our understanding is limited when it is linear. We view life differently when we think in circles. Journal #448   from sdc    7.8.05

Hey-a-a-hey! Hey-a-a-hey! Hey-a-a-hey! Grandfather, the Great Spirit, behold me on earth. It is said that you lived first. You are older than all the prayers that are sent to you. All things on earth, the four-leggeds, the wings of the air, belong to you. It is said that you have made all things. Also, you have set the powers of the four quarters to cross each other…I thus will send up a voice on behalf of everything that you have made. – Black Elk – A Blackfeet Chief

Mother Nature is all-powerful, and eternity is on her side. Forsake the citadel for a few years, abandon the canon or machine gun for a few months in the prairie, and soon grass and brambles will have overgrown the stones, and rust corroded the hard steel. …Of them today remain no more than the ruins, and the ruins themselves finally disappear back into the eternally virgin earth. – Ghost Dancers at Wounded Knee

When I was ten years of age I looked at the land and the rivers, the sky above, and the animals around me and could not fail to realize that they were made by some great power. I was so anxious to understand this power that I questioned the trees and the bushes. It seemed as though the flowers were staring at me, and I wanted to ask them “Who made you?” I looked at the moss-covered stones; some of them seemed to have the features of a man, but they could not answer me. Then I had a dream, and in my dream one of these small round stones appeared to me and told me that the maker of all was Wakan Tanka (the Great Spirit), and that in order to honor him I must honor his works in nature.-  Brave Buffalo

The land…was put here for us by the Great Spirit and we cannot sell it because it does not belong to us. You can count your money and burn it within the nod of a buffalo’s head, but only the Great Spirit can count the grains of sand and the blades of grass of these plains. As a present to you, we will give you anything we have that you can take with you; but the land, never. We should understand well that all things are the work of the Great Spirit. We should know that He is within all things: the trees, the grasses, the rivers, the mountains, and all the four-legged animals, and the winged peoples; and even more important, we should understand that He is also above all these things and peoples. When we do understand all this deeply in our hearts, then we will fear, and love, and know the Great Spirit, and then we will be and act and live as He intends. – Black Elk – A Blackfeet Chief