National Museum  of the American Indian

Native American Heritage Programs walked in the Native Organizations Division with Carla & Allan Messinger and Lisa Roach.  You can walk with us & see a sample of what we saw during the Opening Procession!  You can make the pictures larger, just click on them to see a full picture.  Below the photo collection is an article.

Set against the dramatic backdrop of the U.S. Capitol building on the National Mall, the museum’s location symbolizes a deeper understanding and reconciliation between America’s first citizens and those who have come to make these shores their home.

The opening of this museum marks a unique cultural achievement as Native Americans from North, Central, and South America realize a long-awaited dream to share and honor their vibrant cultures with visitors from throughout the world. Visit the new museum at http://www.nmai.si.edu.

Join us for the procession! 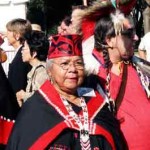 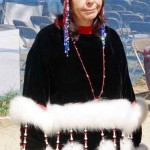 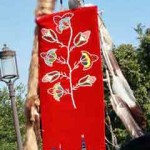 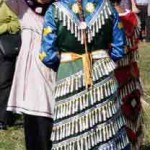 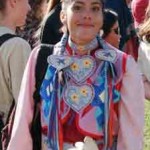 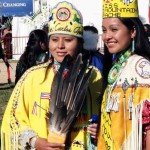 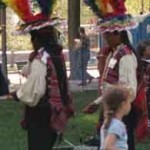 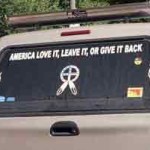 America Love it, Leave it or Give It Back!

People sang, danced, made music & had a day full of memories!

Waníshi (Thank you) for walking with us.

Some scholarly speculation has placed the beginning of Native American civilization in about 5,000 B.C., roughly 10,000 years before 1492 A.D., when “Columbus sailed the ocean blue.” Although he was an avid ocean crosser, Columbus made four trans-Atlantic voyages from Spain, but never reached North America. Because he knew the earth was round, he reasoned he could reach “the Indies” by sailing West. He didn’t bargain on running into another, then unknown continent.

There remains disagreement over whether the American Indians came here by boat—and from where is even less certain—or if their founding fathers “fell from the sky,” as some Indian faith purports. But either way they came here more directly than Columbus. In 1492 Columbus found the Canary Islands and then San Salvador, in the Bahamas, and claimed possession of them for Spain. By 1498 he had discovered, and had become viceroy of, other islands, including Hispaniola, the Leeward Islands, St. Kitts, the Virgin Islands, Puerto Rico and Trinidad and also Honduras. The people he met, he called “Indians.”

Mainland Indians were lucky that Columbus didn’t land there. His shipboard log described the Arawak Indians of the Caribbean that he corralled as so “cowardly” that they could be forced to “work and sow and do everything else that shall be necessary.” That legacy was remembered by 600 protesting Colorado Indians who blocked this year’s Columbus Day parade in Denver, carrying signs that said, “Not Genocide—Celebrate Pride.” More than 200 of them were arrested.

The Vikings, under Leif Ericsson, had discovered some of North America almost 500 years earlier. There is speculation about their landings, but the sites often mentioned include Newfoundland and Nova Scotia, where Viking implements have been found dating back to the year 1000.

In 1585 English colonists landed on Roanoke Island off the North Carolina coast, but ships that returned there in 1590 found the settlement abandoned, apparently because of disease or Indian attacks. The fate of “The Lost Colony” remains one of American history’s enduring mysteries.

The first permanent English settlement in America was built in 1607 on marsh land at Jamestown in southeast Virginia. After surviving some starving winters, the colonists were saved by the arrival of English supply ships.

Tobacco, long grown by the Indians of North America, began to be cultivated by the English settlers there in 1612 for profitable export to the millions who became hooked on it in Europe. Indians also showed the settlers how to grow other exportable crops, including corn, pumpkins, cranberries and tomatoes. And Jamestown became the home of Pocahontas, a daughter of the Pamunkey chief, Powhatan. After first being kidnapped for ransom by English settlers, she was wooed by and married a successful English tobacco planter, a union that brought a period of peace between the colony and Indians.

The celebrated Plymouth settlement in Massachusetts wasn’t established until 1620, when separatist English Puritans aboard the Mayflower failed to reach their destination in Virginia territory and landed at Cape Cod instead. A treaty in 1621 with the Wampanoag Indians brought both sides 50 years of local peace. That was not available in other bloody combats with Indians whom pious whites attacked, believing them to be agents of Satan.

Some of the English settlers of the Massachusetts Bay also profited from the agricultural training given them by a few Indians they befriended and excluded from their harsh judgment of other “savages” and “heathens.” The settlers, who experienced periodic starving times, learned how to plant and harvest corn, squash and beans and were shown the prime areas to fish and hunt. Still, some colonists favored taking over Indian villages, many of which were devastated by exposure to deadly European diseases, and were determined to drive the Indians away…..

West says that “life was not pretty for much of the history of the Native Americans after the European encounter occurred,” bringing to them what he calls “the destructive edge of colonialism.”

But he adds that there are still more than 560 federally recognized tribes in the United States, proving that more than 2 million Native Americans “are still here,” and despite the lack of “mutual respect between non-natives and natives . . . we are not gone.”

EARLY RECOGNITION—The early natives set some lasting examples for the America we all live in today. Benjamin Franklin—and I should say that I am his namesake, not a descendant became so impressed with the Pennsylvania Iroquois’ tribal constitution, which he saw when he was hired as the tribe’s printer, that the Pennsylvania colony named him to his first diplomatic job, its “Indian Commissioner.”

In 1754 Franklin asked a gathering of American colonial delegates—white men—to use the constitution of the Iroquois Confederacy, adopted in a peaceful merger of six combative tribes, as a model for what would eventually, in 1781, be ratified as the U.S. Articles of Confederation. The Iroquois constitution banned the forced entry of private homes by a tribal government, protected freedom of political and religious expression, and imposed the impeachment of corrupt leaders.

Among the long list of other fascinating Indian unknowns, the fact that Articles I, VI and VII of our Constitution are modeled after the Iroquois charter, is a story not widely perceived. Not until 1987 did the U.S. Senate finally pass a resolution stating that the U.S. Constitution had been modeled on American Indian democracy.

LEARNING HISTORY—We all have a lot of homework to do to begin grasping the Native American saga. …. Richard West, the NMAI director, has said that “native peoples want to remove themselves from the category of cultural relics and, instead, be seen and interpreted as peoples and cultures with a deep past that are very much alive today. They want the opportunity to speak directly to our audiences through our public programs, presentations and exhibits—to articulate in their own voices and through their own eyes the meaning of the objects in our collections and their import in native art, culture and history.” ….