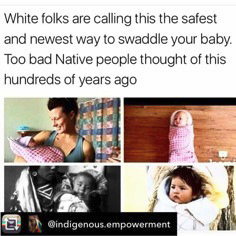 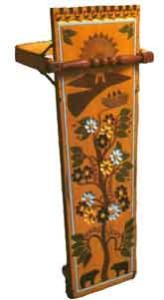 Back view of Traditional Cradleboard

The following information is from Teaching Tolerance Magazine: http://www.tolerance.org/teach/activities/activity.jsp?ar=750&ttnewsletter=ttnewsgen-11022006     Cut & paste this link into your web browser to get the detailed information that is mentioned on this page!  There are many related articles & activities, so use the link.  Waníshi  (Thank you)

In 1990, President George H.W. Bush designated November as “National American Indian Heritage Month,” designed as a celebration of the history, art and traditions of the American Indian and Alaska Native peoples.

In many ways, November is an odd time to observe Native American Heritage Month. It’s the month that the nation also observes the federal Thanksgiving holiday, which to some Native Americans is no cause for celebration, but rather a day of mourning.

November also marks the countdown to football bowl season, when people gather around televisions to root for the “Seminoles,” the “Redmen,” the “Savages” and the “Fighting Sioux.”

In this edition of the ABCs, Teaching Tolerance provides resources and activities to help debunk the mythology of Thanksgiving and expose the racism inherent in Native mascots.

At the same, we encourage educators to go beyond these issues during and after Native American Heritage Month to examine Native people’s struggles to hold onto heritage and secure justice.

Tafeni English, Camille Jackson, Carrie Kilman and Rhonda Thomason contributed to this edition of the ABCs.

Ask nearly any young child in the U.S. to tell the story of Thanksgiving, and he or she will almost certainly recite the following scenario:

The Pilgrims came over on the Mayflower in 1620. They settled in Plymouth, Mass., and met a nice Indian by the name of Squanto who taught them all how to grow food. The following year, the Pilgrims enjoyed a bountiful harvest and invited all of their Indian friends to share in a glorious feast, and all lived happily ever after.

Although a charming tale, the scenario is far from a whole truth.  Read our First Thanksgiving Day Links.

A Must-Read for Every Educator

The Fourth World Documentation Project’s e-guide, Teaching About Thanksgiving, was first published in 1986, yet it still serves as an excellent primer on Thanksgiving observances in schools.

Much of the mythology surrounding Thanksgiving focuses on the peaceful, cross-cultural exchange between the “Indians and Pilgrims.” While it’s true the Wampanoag and the Planters shared in a harvest celebration, within fifty years, the Wampanoag would no longer be a free people. For some Native Americans, Thanksgiving is no cause for celebration, but rather is a day to mourn. This primary document activity for the upper grades introduces students to such perspectives.

Teachers sometimes encourage students to create Indian costumes from brown grocery sacks and Pilgrim hats and coats (complete with big buckles) out of stiff, black construction paper. Unfortunately, such activities are steeped in stereotypes and misinformation.

Did “The First Thanksgiving” feature turkey on the menu?  (Web Editor Note:see our page)

As a follow-up activity, ask students to brainstorm other images or myths common to Thanksgiving and create their own Images in Action.

Almost since the day they were “discovered” by European explorers, American Indians have been caricaturized in stories, ads, films and imagery. Today, hundreds of sports teams use Native images as mascots.

Use the following activity ideas and resources to help students understand the racism behind Native American mascots.

As a follow-up activity, ask students to identify other Native American stereotypes and create their own Images in Action debunking them.

What’s in a Mascot?

Barbara Munson, a member of the Oneida Nation, dissects common misunderstandings on the Native mascot issue and offers constructive ways to address them.

Youth Essay: Take Me Out of the Ballgame

One young sports fan — like thousands of others — is tired of Native Americans being used as ‘props’ under the guise of school spirit.

In 2005, the NCAA took a powerful step, indicating that it would ban Native sports mascots during post-season play. Eighteen schools are subject to the ruling. Will they, or won’t they, change mascots?

After 30 years, the woo-woo-woo of war chants and Indian dances on ball fields are beginning to fade, but some team owners still don’t want to be good sports.

When the Makah Indian tribe of Washington state announced their intention to revive traditional whale hunts after a 70-year respite, they found themselves pitted against local animal rights and environmental activists.

Native American activists use civil disobedience and consensus building to resolve a dispute over environmental resources.

On Nov. 20, 1969, Alcatraz island became the unlikely stage for a landmark event in the Native American rights movement.

A Summer of Violence in the Navajo Nation

In 2006, anti-Navajo violence in the racially tense border town of Farmington, N.M., sparks an investigation by the U.S. Department of Justice.

This Land Is Ours

This website was established in 2002 with funding from the National Science Foundation and McGraw-Hill Higher Education. It offers educational resources and information on prejudice, discrimination, multiculturalism, and diversity, with the ultimate goal of reducing the level of intolerance and bias in contemporary society. Be sure to test your Native IQ.

Students and Teachers Against Racism (STAR)

Through education, STAR seeks to bring the image of Native Americans into the present, to support the well being of Native children in schools through the accurate depiction of history and by raising awareness of the need for sensitivity to Native culture as well bringing recognition to the ongoing contributions of Native Peoples today, and to celebrate the varied and rich cultural traditions of all Native people in the United States.

The Changing Winds Advocacy Center is a Native American civil rights and education agency that aims to provide a “deeper understanding of the Native experience both in education, in the workplace…and indeed, in the world.”

In 2006, the nation celebrates the bicentennial of the Lewis and Clark Expedition, and many educators are asking: ‘Is this a celebration for Native Americans?’  See our webpage.

From Cradleboard to Motherboard

Keepers of the Word

Bilingual storytellers blend history, tradition and culture to teach the power of language and story.

This information is from Teaching Tolerance.  Please remember to go to: http://www.tolerance.org/teach/activities/activity.jsp?ar=750&ttnewsletter=ttnewsgen-11022006