There are several articles on this page.

Health, Crime, and Doing Time: Potential Impacts of the Safe Streets and Communities Act on the Health and Well-Being of Aboriginal People in B.C., a new report by provincial officer of health Dr. Perry Kendall, says the Tory administration’s approach will exacerbate what is already a crisis. 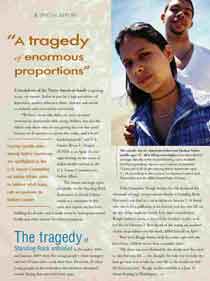 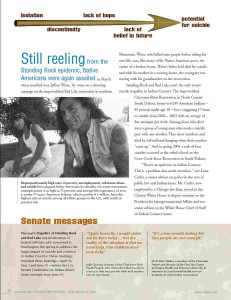 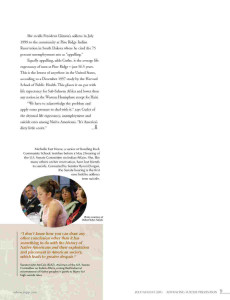 While the quality of healthcare in the United States is improving, albeit at a snail’s pace, disparities based on race/ethnicity, socioeconomic status and other factors have hardly budged, according to the recently released 2010 National Healthcare Disparities Report.

The report, published every year since 2003 by the U.S. Department of Health and Human Services’ Agency for Healthcare Research and Quality, looks at the status of healthcare quality and disparities in the nation, how they have changed over time and where the needs are for improvement.
It uses a group of more than 200 core measures that are categorized in several areas of quality: effectiveness, patient safety, timeliness, patient-centeredness, care coordination, efficiency, health system infrastructure and access.

Across all 179 measures of healthcare quality, nearly two-thirds showed improvement, the 2010 report said. The median rate of change was 2.3 percent per year.

The story was different for access to care, which showed no improvement in about 60 percent of 22 measures. In fact, the other roughly 40 percent were heading in the other direction, the report stated. The median rate of change: -0.6 percent per year.

Few disparities faced by race/ethnic groups are getting smaller. Less than 20 percent of those gaps faced by American Indians/Alaska Natives, as well as Blacks, Hispanics and the poor people, showed signs of narrowing. The Asian/White gap narrowed for about 30 percent of the core measures.

The hefty report is available online in PDF format. Copy & paste this link in your browser http://www.ahrq.gov/qual/nhdr10/nhdr10

The infant mortality rate is 150 percent greater for Indians than for Caucasians.

Indians are 2.6 times more likely to be diagnosed with diabetes.

Life expectancy for Indians is nearly 6 years less than the rest of the U.S. population.

Suicide for Indians is 2 1/2 times higher than the national average.

Indians have fewer mental health professionals available to treat them than does the rest of the U.S. population.

U.S. health-care expenditures for Indian men, women, and children are less than half of what the government spends on the health of federal prisoners.

American Indian and Alaskan Natives teens and young men have the highest suicide rate in the 15 to 24 age group and adult men the second highest rate of suicide after whites (CDC 2004).

About 70 percent of Native Americans live in urban areas, according to the U.S. Census.  Many Native people, although sometimes thousands of miles away from their traditional homeland, still speak their languages or maintain ties with their reservation or Indian communities, but often with some struggle.

Urban American Indians face a health problem unseen by other races, researchers said during March: As they become wealthier, their rates of binge drinking and tobacco use stay the same or even rise.
The nonprofit Urban Indian Health Institute also said diabetes and obesity rates were about the same for urban Indians, whether they were rich or poor. Among other races, people with higher incomes tend to have fewer of those health problems than poorer people.

“When Indian folks drink, it appears to have nothing to do with how much money they have, and that’s not true for any other racial group,” said Maile Taualii, the institute’s scientific director. “There seems to be a sense of hopelessness, a sense that diabetes, alcoholism and other health problems are inevitable in the community, and it doesn’t have to be that way.”
The Seattle-based institute, which gets federal money to track disease trends among native people, analyzed data from a random digit-dial telephone survey conducted between 2001 and 2005 by the U.S. Centers for Disease Control and Prevention in 34 cities from New York to Helena, Mont.
More than half of the roughly 2.5 million American Indians in the United States live in cities, according to the 2000 Census. Yet rarely have medical studies focused on the population’s health as compared to other city dwellers, or to illness rates among Indian people living on tribal lands.
The report offers a detailed analysis of responses from the 3,224 American Indian and Alaska Natives and 178,983 non-Indians surveyed.
Overall, fewer Indian respondents reported drinking than people of other races. But among those who did drink, more American Indians reported an episode of binge drinking – or consuming five or more drinks in one go – at least once in the previous month.
Of higher-income respondents – defined as those earning more than $38,700 for a family of four – 46 percent of American Indians reported one episode of binge drinking in the previous month, compared with 25.3 percent for people of other ethnic backgrounds.
Taualii said the results of the study – and data showing that native people in some cities reported having more difficulty getting health care than urbanites of other backgrounds – show special attention must be paid to the health disparities for urban Indians.
Federal law requires taxpayer-funded tribal clinics, but the Bush administration has been pushing for those services to be cut off in urban areas. For the third year in a row, Bush’s 2009 budget proposal calls for the Urban Indian Health Programs’ funding to be cut.
Unlike American Indians who live in rural areas or reservations, “urban Indians have access to publicly and privately financed health care services like other Americans,” said Christin Baker, a spokeswoman for the White House’s Office of Management and Budget.
Newman Washington, who runs drug and alcohol programs at a government-funded Indian clinic in Wichita, Kan., said tight finances already make it difficult to meet the needs of patients from nearby tribes, including the Kickapoo, Potawatomi, Iowa, and Sac and Fox.
Clients trying to detox from alcohol often have to wait two months to be admitted to a hospital bed, or travel 75 miles to Ponca City, Okla., to be seen in an inpatient facility, Washington said.
“People go away and get an education, but then they come back home and have a really hard time changing their behavior,” said Washington, a member of the Eastern Shoshone tribe of Wyoming. “Whenever you start looking at the core, there’s some shame and guilt that people are carrying around from past generations.”
Officials at the U.S. Department of Health and Human Services, which oversees the urban clinics, did not return messages seeking comment on the study. Staff members for the Senate Indian Affairs Committee were examining the report, a spokesman for its leader, Sen. Byron Dorgan, D-N.D., said Wednesday.
Rep. Nick Rahall, D-W.V., said in a statement that the report “makes it clear that far too many disparities exist between those Native Americans living on A bill approved by the Senate last week would boost programs at the federally funded Indian Health Service, prompt new construction and modernization of health clinics on reservations and attempt to recruit more Indians into health professions.