Women in the Military

There are two articles on this page.

The Warrior Tradition Continues – Women in the military

U.S. Department of the Interior “The warrior tradition is best exemplified by the following qualities inherent to most, if not all, Native American societies”:

Strength– wowasake* (WO-wa-shak-ay): To be an American Indian warrior is to have physical, mental, and spiritual toughness. Many traditional cultures recognize that war disrupts the natural order of life and causes spiritual disharmony. Military service is a unique way to develop an inner strength that is valued in Native American communities.

Honor– woyuonihan* (WO-you-o-nee-han): Before going into service and after their return, warriors are recognized by family and community. Recognition takes place through private family gatherings, or through public ceremonies, such as tribal dances or intertribal events.

Devotion; also to believe in – wowicala* (WO-wee-cha-la): Native American warriors are devoted to the survival of their people and their homeland. If necessary, warriors will die to preserve their culture, for death to the Native American warrior is another step in the advancement of life. It is understood that the warrior’s spirit lives on eternally.

Wisdom– woksape* (WOK-sa-pay) * Words with phonetic spellings are parts of the Dakota language. Dakota is the language of the Sisseton-Wahpeton Tribe, the Tribe of the veterans in the modern pictures.” Text from the JPEG – U.S. Department of the Interior

Historians have only recently rediscovered and verified the actions of an Oneida woman, Tyonajanegen, at the battle of Oriskany during the American Revolution (1775-1783). Tyonajanegen was married to an American Army officer of Dutch descent. She fought at her husband’s side on horseback during the battle, loading her husband’s gun for him after he was shot in the wrist.

The story of Sacajawea, the Shoshone woman who accompanied the Lewis and Clark expedition of the early 19th century, is somewhat better known. Much of what is Women common knowledge is myth, however. Sacajawea has been remembered as a guide. In reality, she served as an interpreter for members of the expedition, who were unfamiliar with the Indian language. “Bird Woman’s” service is described in the journals kept by Army Captains Meriwether Lewis and William Clark during the expedition.

Four Native American Catholic Sisters from Fort Berthold, South Dakota worked as nurses for the War Department during the Spanish American War (1898). Originally assigned to the military hospital at Jacksonville, Florida, the nurses were soon transferred to Havana, Cuba. One of the nurses, Sister Anthony died of disease in Cuba and was buried with military honors.

Fourteen Native American women served as members of the Army Nurse Corps during World War I, two of them overseas.

Mrs. Cora E. Sinnard, a member of the Oneida Tribe and a graduate of the Episcopalian School of Nursing in Philadelphia, served eighteen months in France with a hospital unit provided by the Episcopal Church. 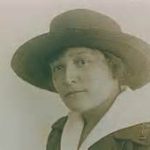 Charlotte Edith (Anderson) Monture of the Iroquois Nation also served as an Army nurse in France. Charlotte was born in 1890 in Ohsweken, Ontario, Canada. In 1917, she left her job as an elementary school nurse to join the Army Nurse Corps. She later referred to her service in France at a military hospital as “the adventure of a lifetime.” Charlotte passed away in 1996, at the age of 106.

Corporal Bernice (Firstshoot) Bailey of Lodge Pole, Montana, joined the Women’s Army Corps in 1945 and served until 1948. After the war, she was sent to Wiesbaden, Germany, as part of the Army of Occupation.

Beatrice (Coffey) Thayer also served in the Army of Occupation in Germany. Beatrice remembers being assigned to KP with German POWs, who were accompanied by armed guards. Beatrice was in Germany when the Berlin Wall went up, and remained Women Veterans in the Army until the 1970s.

Alida (Whipple) Fletcher joined the Army during World War II and trained as a medical specialist. She was assigned to the hospital at Camp Stoneman, California, which was an Army port of embarkation for the Pacific. Alida was on duty the night two ships loaded with explosives collided at a nearby ammunition dump, killing approximately 400 sailors and wounding many more. The wounded were brought to the hospital where Alida worked. She remembers that night as the most tragic of her life.

First Lieutenant Julia (Nashanany) Reeves, a member of the Potawatomie Indian Tribe of Crandon, Wisconsin, joined the Army Nurse Corps in 1942, and was assigned to one of the first medical Units shipped to the Pacific. The 52nd Evacuation Hospital Unit was sent to New Caledonia before its members had received their Army uniforms. When the hospital ship Solace arrived at New Caledonia, Julia was assigned temporary duty aboard the ship.

The following year, Julia was transferred to the 23rd Station Hospital in Norwich, England, where she was stationed during the invasion of Normandy. She remained in Norwich through V-J Day, returning shortly afterward to the United States. During the Korean War, Julia mobilized with the 804th Station Hospital. 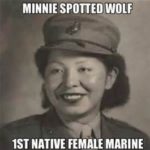 Private Minnie Spotted-Wolf of Heart Butte, Montana, enlisted in the Marine Corps Women’s Reserve in July 1943. She was the first female American Indian to enroll in the Corps. Minnie had worked on her father’s ranch doing such chores as cutting fence posts, driving a two ton truck, and breaking horses. Her comment on Marine boot camp “Hard but not too hard.”

Ola Mildred Rexroat, an Oglala Sioux from Pine Ridge Indian Reservation, South Dakota, joined the Women’s Air Force Service Pilots (WASP) directly out of high school. Her job was to tow targets for aerial gunnery students at Eagle Pass Army Air Base in Texas. Towing targets for student gunners was a fairly dangerous assignment, but “Rexy” was happy to be able to contribute to the war effort in a meaningful way. After the war ended, Ola joined the Air Force and served for almost ten years.

During the 1950s and 1960s, fewer women felt the call to military service. The services, however, were in desperate need of womanpower during the Korean conflict and the Vietnam War, and conducted extensive recruitment campaigns aimed at young women. Many Native American women answered their country’s call.

Sarah Mae Peshlakai, a member of the Navajo Tribe from Crystal, New Mexico, enlisted in the Women’s Army Corps in 1951 and served until 1957. Peshlakai trained as a medical specialist and was assigned to Yokohama Army Hospital in Japan, where she helped care for casualties from the Korean battlefields.

erna Fender entered the Navy during the Korean Conflict and trained at Bainbridge, Maryland. She was severely injured during basic training and was sent to a Navy hospital for physical rehabilitation. Undeterred, Verna returned to Bainbridge and completed her training. The Navy assigned Verna to its base in San Diego, California, where she completed her 3-year term of enlistment, working in the departments of berthing and sectioning, supply, and ordnance.

Shirley M. Arviso, a Navajo of the Bitter Water Clan, served in the Navy from 1953 through 1963. She was the Communications Officer in charge of a group of people who decrypted classified messages.

Pearl Ross, a member of the Arikara Tribe from the Fort Berthold Reservation, joined the Air Force in 1953, and trained as a medical specialist. Her first assignment was to the Air Force hospital in Cheyenne, Wyoming. Pearl was then assigned to Offutt Air Force Base in Nebraska, where she worked in the 865th Medical Group at SAC HQ. During the Vietnam era, she saw many men who had been wounded in the combat theater. Pearl volunteered for overseas duty, but was turned down because the Air Force was hesitant to send women to Vietnam.

Linda Woods enlisted in the Air Force in the late 1950s and was on duty when President Kennedy was assassinated. She remembers that the air base where she was stationed went on full alert. A later assignment took her to the southern United States during the Civil Rights movement. As a non-white, she found the environment somewhat difficult, however, she retained pride in her uniform as a woman of color.

Barbara Monteiro joined the WAC in 1963 and took her basic and secretarial training at Ft. McClellan. Alabama. Her first duty assignment was to Ft. Huachuca, Arizona, where she worked for three years in the travel office and motor pool in support of troop readiness during the Vietnam War. In 1966, Monteiro was assigned to Ft. Richardson, Alaska, where she served as an administration specialist at the Education Center for a year.

Increasing numbers of women, including Native Americans, entered the military in the 1970s and 1980s.

Patricia White Bear joined the Navy in 1981. She trained as an instrument man and served at sea repairing, adjusting and calibrating the wide variety of mechanical measuring instruments used aboard ships.

Dolores Kathleen Smith, a Cherokee, graduated from the Air Force Academy in 1982. She completed navigator training and was assigned to a KC-135 unit. She served in the operational plans division of her unit and also as an instructor before retiring as a captain from the Air Force in 1990.

Darlene Yellowcloud of the Lakota Tribe was inspired to join the Army because so many of the men in her family had served. Her grandfather, Bear Saves Life, was killed in action in France during World War I. Her father, brothers, brothers-in-law, uncles and cousins were all veterans. Darlene was assigned to the U. S. Army in Korea as a Specialist 4th Class.

Lawnikwa Spotted-Eaglefortune joined the Army in 1988, and attended Basic Training at Fort Dix, New Jersey. Acting as a guide-on carrier, she was injured when another carrier grounded a guide iron through her foot into the ground. She still has the scar, and now serves as a member of the Virginia Air National Guard.

As of 1980, at least sixty Native American women were serving in the Eskimo Scouts, a special unit of the Alaska National Guard. The Eskimo Scouts patrol the western coastline of Alaska and the islands separating Alaska and Russia. The Scouts are the only members of the National Guard who have a continuous active duty mission. This unit was organized during World War II, and the wives of scout battalion members have always been involved in patrol missions.

Women were admitted as of official members in 1976, and only then began to receive pay, benefits and recognition for their work. Scouts currently patrol ice flows in the Bering Straits, monitor movements on the tundra, and perform Arctic search and rescue efforts as required.

Native American women lost their lives in the service of their nation.

Katherine Matthews of Cherokee, North Carolina, joined the Navy in the late 1970s and trained as an Aviation Machinist’s Mate. She died while serving in California in 1985. Terri Ann Hagen, a former Army medic, was a member of the Army National Guard when she was killed fighting a fire on Storm King Mountain in Colorado in 1994.

Army Pfc. Lori Ann Piestewa, 23, of the Hopi Nation was a member of 507th Maintenance Company from Fort Bliss and was ambushed near Nasiriyah, Iraq, on March 23, 2003. Lynch, Johnson and others were taken prisoner. Nine Soldiers, including Piestewa, were killed in action. She was posthumously promoted to Spc. Piestewa.

As of 1994, 1,509 Native American women and Native Alaskan women were serving in the military forces of the United States. Thousands more have served in the military over time.

Currently there are Native women serving aboard the aircraft carriers the USS Roosevelt and USS Stennis.