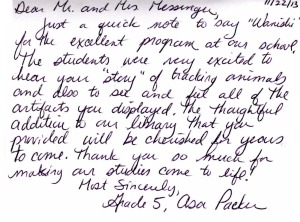 and Part of Native Contributions Exhibit 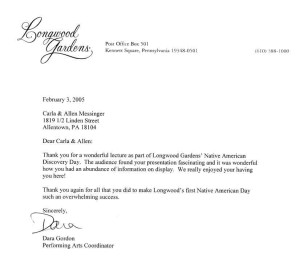 Lenape Lifeways: The roles and histories of the indigenous peoples of Pennsylvania often are misunderstood or romanticized. Our talks offer clear insights into different aspects of native culture and history. Lenape Lifeways  At the time of Columbus, as many as 10 million Native Americans lived in North America. Many thousands lived in the vast homeland of the Lenni Lenape, who were the first inhabitants of eastern Pennsylvania. Respected by William Penn, the Lenape were later forced from their villages by Penn’s sons and the infamous Walking Purchase. We will provide an interactive introduction to the Lenape and compare and contrast their social customs, religion, family life, agriculture, healing practices and crafts with those of the Europeans and colonial Americans. This program can be family or adult oriented.

We have a variety of letters from various organizations that we have provided programs for over the years.  We can provide a sample of these letters if you need them.

The following article shows one of our school presentations.

Carla Messinger slipped a yellowish-tan skirt over her own dress and draped a poncho-like top on her shoulders. The outfit was decorated with glass bead designs and long strands of black horse’s hair. In a few seconds, she had transformed into a typical female Lenni Lenape, resembling her ancestors.

However, in these more modern times, she told the students gathered before her, Native Americans like her look and dress the same as everyone else. “Native Americans today dress like anybody else in your neighborhood,” she said, before putting on the colorful apparel, “but nobody is living like their relatives of five-hundred years ago.” Messinger and her husband Allan, who is not Native American, gave fourth-graders at the Gilbert Spruance Elementary School in Oxford Circle a peek into the lives of her ancestors.

The visual presentation, which included toys, tools and pictures illustrating the Lenape way of life, was offered as a component of Pennsylvania’s fourth-grade history curriculum. It also was fitting for the Thanksgiving holiday. As part of the lesson, the students made jewelry, cornbread, and planted seeds. Kindergarten students were invited to learn about the Lenape and their history. The youngsters gained insight to how the Lenni Lenape lived, ate, hunted and survived. The Lenape tribe lived in eastern Pennsylvania and parts of New Jersey, New York, Delaware and Maryland. They also were known as the Delaware Indians.

Like most Native Americans, the Lenape used just about everything they found to their advantage. Almost every part of the animals they hunted was used in some form. Allan Messinger showed the students various tools used by the Lenape tribe, including a beaver tooth used to whittle wooden utensils. He also described other uses for animal parts — like turkeys, or pleuo in the Lenape language, whose feathers were made into jewelry and fans, and whose leg bones made a great whistle. “They used everything thoroughly,” he explained. Deer, or achtú, were particularly useful for the Lenape people. The antlers were made into arrowheads, gardening tools and jewelry, and the jawbone could be used to scrape corn from its cob. Deerskin and fur served as clothing material. The Indians made the garments with needles fashioned from deer bone fragments, while tendons of the animal were used as thread.

The Spruance students enjoyed the lesson. “I liked how they used animals to make tools and how they survived with it,” said fourth-grader Tiana Gonzalez. Lenape homes, which were shaped like upside-down teacups, were made of bark and tree branches. They also made very lodge houses that could accommodate several families. The Lenape people did not have tepees, which were common for Indians who lived in the Midwest. Fourth-grader Samson Sam really liked that part of the lesson. “They built things we don’t even do,” he said.

In 1979, Carla Messinger, a substitute elementary and special-education instructor, founded the Lenni Lenape Historical Society and Museum of Indian Culture in Allentown and became its first volunteer Executive Director. She presented exhibits and educational lectures at the museum and on the road, after retiring she became the director of Native American Heritage Programs and continues to share her culture through educational programs and through lectures for the Pennsylvania Humanities Council.

Allan Messinger, a veteran teacher, helps her teach people about the Lenape tribe and its customs. The mission is important to them because, as they see it, there is little historical material about the Lenape people. “Children are learning about native people and they get one paragraph” from textbooks, Carla Messinger said. The couple also wants to instill “native pride” in children of Native American descent and prevent stereotyping. “We want to help reduce prejudices and make people aware of (Native American) contributions,” Carla Messinger said. ••

Call now to schedule a visit to your class!