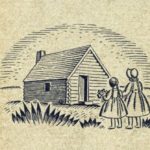 This illustration by Helen Sewell graced one of the original editions of Little House on the Prairie, published in the 1930s. That book tells of the period in the Ingalls family’s lives in which they settled in Kansas on land that still belonged to Native Americans. (Wikimedia Commons)  By Kat Eschner           smithsonian.com    February 8, 2017

Little House on the Prairie, a series of eight mostly autobiographical books about Laura Ingalls Wilder’s life as a white settler on the American prairie, has been a perennial favorite ever since it was first published in 1935.

The third book, which has the same name as the series, takes place when the Ingalls family settled on the Osage Diminished Reserve from 1869 to 1870. “The Ingalls family arrived in Kansas with a large tide of other squatters in the summer and fall of 1869,” writes Penny T. Linsenmayer in Kansas History. In the end, they moved on after federal troops threatened to remove them and other illegal settlers from Osage land, she writes.

Portrayals of Native American characters in this book and throughout this series have led to some calls for the series to not be taught in schools. In the late 1990s, for instance, scholar Waziyatawin Angela Cavender Wilson approached the Yellow Medicine East school district after her daughter came home crying because of a line in the book, first attributed to Gen. Phil Sheridan, but a common saying by the time: “The only good Indian is a dead Indian.” Her story gained national attention.

“When the book is given a critical reading, it becomes quite clear why an Indigenous child would walk away with feelings of shame, hurt and embarrassment,” Waziyatawin writes. “There are literally dozens of derogatory, dehumanizing and damaging messages.”

The Ingalls family were people of their time and place. In the words of Laura June Topolsky writing for The Awl, that meant they were “Manifest Destiny personified.” But they’re also the characters at the center of a beloved children’s series, one that new children continue to discover all the time.

Even Pa, the adult character who is most sympathetic to the Osage Indians on whose land the Ingalls family are squatting, sees white people as having a right to the land, writes Laura Ingalls scholar Amy Fatzinger. She quotes Laura’s Pa from the text:

When white settlers come into a country, the Indians have to move on. The government is going to move these Indians farther west any time now. That’s why we’re here, Laura. White people are going to settle all this country, and we get the best land because we get here first and take our pick. Now do you understand?

Topolsky writes about beginning to read the series to her own daughter and realizing flaws she hadn’t when she was first reading them as a child. She stops reading them to her daughter. “These books are a fascinating and incredibly flawed version of a series of events that actually occurred, remembered through the eyes of a small child, and written in the 1930s,” she writes.

Some have argued that the Little House series should continue to be read, but critically. That goes for reading it with children and also reading or rereading it as an adult. “To ban Little House on the Prairie might seem a knee-jerk reaction to a complex text,” Heldrich writes. “The text’s portrayals of both the Ingallses and the Indians belie any easy assessment of the book and its various characterizations.”

Maybe they are a gateway for talking to children about America’s colonialist history. Or maybe not. Watziyawin and others have argued that the books are such a widely-accepted part of the American kid-lit canon that it’s difficult to see how they could possibly be taught critically.

For Topolsky, the first step was putting a series she had loved as a child down and reading something else to her daughter. Maybe indefinitely. “I’m not sure that their literary value is so high that I can overlook what I see as grave and deeply integral flaws,” she writes.
Read more: http://www.smithsonianmag.com/smart-news/little-house-prairie-was-built-native-american-land-180962020/#13HFziRZLotjRo2W.99image: http://thumbs.media.smithsonianmag.com//filer/a2/a8/a2a8d106-1bd3-4711-92ef-675b8db4b793/littlehouse.jpg__800x600_q85_crop.jpg
Follow us: @SmithsonianMag on Twitter