5 WOMEN AUTHORS and A Colonial Quiz!

Sue Katz   When the Shadbush Blooms AND a wide variety of children’s books!  Take a Colonial Quiz, which is found below!

Among her works are Snowdrops for Cousin Ruth (June, 1998), and the poetry collection, Mrs. Brown on Exhibit and Other Museum Poems (July, 2002), The Revolutionary Mrs. Brown and Other Poems of Colonial Life (Simon and Schuster/2004).   Looking for Jaguar and Other Rainforest Poems (Greenwillow-Harper Collins/2005).  Oh Theodore! Guinea Pig Poems (2008).  THE PRESIDENT’S STUCK IN THE BATHTUB (Clarion Books, Feb., 2012), a Junior Library Guild selection, and the humorous science-fiction e-book, FLAT LIKE FRED. 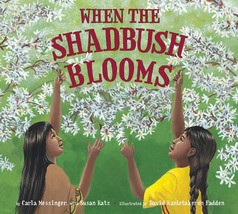 If you need proof of how much things have changed in America in 300 years or so, see if you can answer the following simple questions: (Answers can be found below.)

2. Who would be most interested in pickadill? a. an eight-year-old     b. a blacksmith     c. a woman using a spinning wheel

3. What would you do if you found a catamount in your yard? a. pick it and hang it up to dry     b. store it in a safe place     c. shoot it with your flintlock

AND HERE ARE THE ANSWERS:

1. You play with a whimmy diddle; it’s a notched stick with a propeller blade on the end – when you rub the notches with a second stick, the blade rotates. You can use it to predict the future by asking yes or no questions and seeing which way the blade spins (to the right is yes, to the left is no). This is the colonial era’s version of a Magic 8-ball. 🙂

2. Since pickadill is a form of tag played in the snow, it would be of most interest to an eight-year-old.

3. A catamount is a wildcat, so shooting it would be your safest option.

4. A spider was a long-handled frying pan with three legs that you would have used to cook over the open fireplace in your kitchen.

5. If you chose crowdy, you’ll be lunching on thick oatmeal.  If you picked hush puppies, you won’t be eating shoes; you’ll be eating cornmeal balls fried with fish. They got their name because any dogs around the cooking fire always whined for a taste.  If you selected flummery, you chose berry juice sweetened and then thickened with cornstarch. (Though my grandmother didn’t call this flummery, she used to make it for me when I was a little girl, and I highly recommend it.)

You can purchase from www.mcfarlandpub.com  While it is mostly about Cherokee women as an example, the middle of the book visits early tribal women up and down the coast. It speaks of Mayan women, women in the Caribbean, etc.

During the twentieth century, dozens of protests, large and small, occurred across North America as American Indians asserted their anger and displayed their disappointment regarding traditional museum behaviors. In response, due to public embarrassment and an awakening of sensitivities, museums began to change their methods and, additionally, laws were enacted in support of American Indian requests for change. The result is that American museums have revised their long-held practices due to American Indian protests.

Spirited Encounters provides a foundation for understanding museums and looks at their development to present time, examines how museums collect Native materials, and explores protest as a fully American process of addressing grievances. Now that museums and American Indians are working together in the processes of repatriation, this book can help each side understand the other more fully.

About the Author  Karen Coody Cooper was recently the Museum Training Program Coordinator at the National Museum of the American Indian, and was formerly Training Programs Manager at the Smithsonian Center for Education and Museum Studies. She holds a Master of Liberal Studies degree, with a museum and anthropology emphasis, from the University of Oklahoma and is an enrolled member of the Cherokee Nation of Oklahoma. Karen Coody Cooper Website.

Gunlög Fur A Nation of Women: Gender and Colonial Encounters Among the Delaware Indians

and           Colonialism in the Margins:  Cultural Encounters in New Sweden and Lapland

A Nation of Women Gender and Colonial Encounters Among the Delaware Indians   by Gunlög Fur
“Fur’s use of Swedish records and her imaginative approach to the Moravian records make this book rich in new information on Delaware History and a major contribution to the literature in women’s history.”—Nancy Shoemaker, University of Connecticut

A Nation of Women chronicles changing ideas of gender and identity among the Delaware  (Lenape) Indians from the mid-seventeenth through the eighteenth century, as they encountered various waves of migrating peoples in their homelands along the eastern coast of North America.

In Delaware society at the beginning of this period, to be a woman meant to engage in the activities performed by women, including diplomacy, rather than to be defined by biological sex. Among the Delaware, being a “woman” was therefore a self-identification, employed by both women and men that reflected the complementary roles of both sexes within Delaware society. For these reasons, the Delaware were known among Europeans and other Native American groups as “a nation of women.”

Decades of interaction with these other cultures gradually eroded the positive connotations of being a nation of women as well as the importance of actual women in Delaware society. In Anglo-Indian politics, being depicted as a woman suggested weakness and evil. Exposed to such thinking, Delaware men struggled successfully to assume the formal speaking roles and political authority that women once held. To salvage some sense of gender complementarily in Delaware society, men and women redrew the lines of their duties more rigidly. As the era came to a close, even as some Delaware engaged in a renewal of Delaware identity as a masculine nation, others rejected involvement in Christian networks that threatened to disturb the already precarious gender balance in their social relations.
Drawing on all available European accounts, including those in Swedish, German, and English, Fur establishes the centrality of gender in Delaware life and, in doing so, argues for a new understanding of how different notions of gender influenced all interactions in colonial North America.
Gunlög Fur is Professor of History at Växjö University, Sweden.
University of Pennsylvania Press      Cloth Aug 2009 | ISBN 978-0-8122-4182-2 | $39.95 | 280 pages | 6 x 9 | 17 illus.  A volume in the Early American Studies series

Colonialism in the Margins: Cultural Encounters in New Sweden and Lapland  by Gunlög Fur
This book explores Swedish encounters with American Indians in the New Sweden colony on the Delaware River during the second half of the seventeenth century. To place Swedish-Indian interactions in perspective a comparison is made with Swedish-Saami colonial relations during the same time period. These were two expressions of Great Power ambitions that place Sweden firmly within the context of European colonialism, but also meant the two outstanding examples of Swedish encounters with indigenous populations. Focus is on issues of land ownership and transactions, on trade, and on cultural encounters.

The book is of particular interest to historians of colonial encounters in America and Sweden, but also in a larger context concerning European colonialism and its heritage today.

About the author
Gunlög Fur, Ph.D. (1993) in History, University of Oklahoma, is Associate Professor of History at Växjö University in Sweden. She has published on colonial encounters and gender in Northeast America and Northern Scandinavia.

Let the River Run Silver Again!  How One School Helped Return the American Shad to the Potomac River — And How You Too Can Help Protect and Restore Our Living Waters by Sandy Burk

The National Science Teachers Association has included this title in their “NSTA Recommends” program.  2006 Green Earth Book Award
“In Let the River Run Silver Again! author Sandy Burk tells an inspiring story of how a great elementary school environmental education project deeply influenced the lives of young people by involving them in a hands-on project that combined real environmental restoration with public advocacy and learning science. Just as important, though, the author follows up the inspiration with a thorough recipe for teachers and and students to research, design, and set up their own projects, anywhere in the United States.  Sandy’s subtitle says it all: How One School Helped Return the American Shad to the Potomac River — And How You Too Can help Protect and Restore Our Living Waters. The Potomac, the other rivers of the Chesapeake Bay, and indeed, waterways all over the United States need programs like this one. Such first-hand education is an essential investment in the treasures that are our living waters, and in the young people who will become the stewards of them.” — William C. Baker, President, Chesapeake Bay Foundation
June 2005,  8 1/2 x 11″  40 pp.      ca. 50 color figures  Softcover,  $14.95   (0-939923-95-5)   http://www.mwpubco.com/LetRiverRunSilver.htm

“Culture is broader than most people think — fish, wildlife, water, land, are all an integral part. We lose bit by bit because of the loss of resources”. Chad Colter Shoshone Bannock Tribal Fish and Game Director.